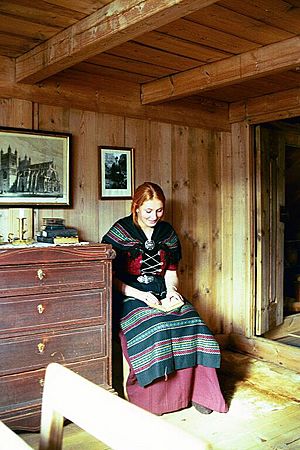 Eivør in the museum Blásastova in Gøta

Eivør Pálsdóttir (born 21 July 1983 in Syðrugøta, Faroe Islands) is a Faroese singer and composer. She sings in Faroese, but also in English, Icelandic, Swedish and Danish.

Eivør Pálsdóttir is one of the most well-known singers from the Faroe Islands.

"Krakan", her second solo album, won the nomination for an Icelandic Music Award in three categories. Eivor won Best Singer and Best Performer in Iceland in 2003.

All content from Kiddle encyclopedia articles (including the article images and facts) can be freely used under Attribution-ShareAlike license, unless stated otherwise. Cite this article:
Eivør Pálsdóttir Facts for Kids. Kiddle Encyclopedia.