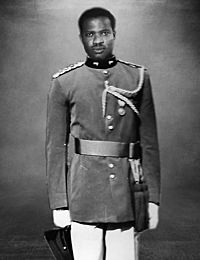 Ejike Ebenezer Obumneme Aghanya (27 November 1932 – 3 July 2020) was a Nigerian military officer and electrical engineer. He was in the Nigerian Army and the Biafran Armed Forces, retiring as a Colonel.

He was accused of being part of the 1966 Nigerian coup d'état. He was arrested and imprisoned without trial until the outbreak of the Nigerian Civil War where he worked in key jobs in the Biafran Armed Forces. He was the head of the Biafran Agency for Research and Production (RAP).

Later he was the Chief of Staff of the Biafran Organisation of Freedom Fighters (BOFF) which was the guerrilla warfare and special operations arm of the Biafran Armed Forces.

All content from Kiddle encyclopedia articles (including the article images and facts) can be freely used under Attribution-ShareAlike license, unless stated otherwise. Cite this article:
Ejike Obumneme Aghanya Facts for Kids. Kiddle Encyclopedia.