Elaeocarpus sedentarius, known as the Minyon quandong, is a species of Australian, endangered, mid-sized rainforest trees. In 2008 David J. Maynard and Darren M. Crayn formally scientifically described the species under this name. Previously it had several published informal scientific names and descriptions, the most well known was Elaeocarpus sp. Rocky Creek (G.Read AQ 562114).

They grow naturally in a small area on the south of the Mount Warning caldera in northern New South Wales, Australia. A single wild tree was also discovered in the north of the Caldera, approximately 35 km north of the rest of the populations. This tree occurs in Brush Box ecotone areas and warm temperate rainforests.

The Minyon Quandong is naturally rare and considered endangered with extinction. Their very restricted populations have conservation status listings as endangered under both the NSW Threatened Species Conservation Act and the Australian national Environment Protection and Biodiversity Conservation Act 1999 (EPBC Act).

Leaves are roundish or obovate, 7 to 15 cm long, 4 to 8 cm wide. Leaf edges are somewhat wavy toothed (crenate), other leaves not toothed. The underleaf is a glaucous white with small hairs, particularly on the leaf veins. The leaf stem is 3 to 6 mm long. Old leaves to orange to dull red before falling.

Flowers are greenish cream and appear in racemes, 2 to 5 cm long. In autumn the fruit matures, being a round shaped blue drupe, 20–35 mm in diameter. The blue skin covers a highly fiberous "flesh". The central "stone" is not grooved, but somewhat sculptured in appearance. Like many Australian Elaeocarpus, germination from seed is slow and difficult. 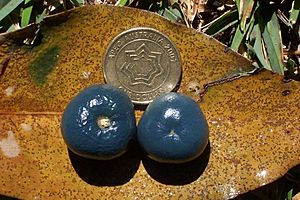 Elaeocarpus sedentarius fruit next to a dollar coin, on a Brush Box leaf

All content from Kiddle encyclopedia articles (including the article images and facts) can be freely used under Attribution-ShareAlike license, unless stated otherwise. Cite this article:
Elaeocarpus sedentarius Facts for Kids. Kiddle Encyclopedia.