The Elaho River is a c.70 km long river beginning in the Coast Mountains northwest of the towns of Whistler and Pemberton, British Columbia. It is a tributary of the Squamish River and is known for its whitewater rafting and kayaking as well as for the intense alpine scenery lining its route.

The Elaho is much larger than the Squamish River when it meets with it. The Elaho is often subject to flash flooding. 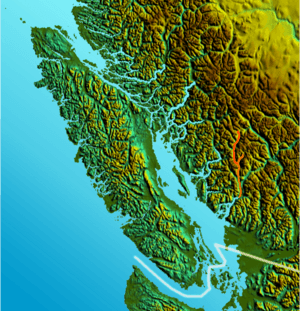 While Clendinning and Sims Creeks are the Elaho’s largest tributaries, the Elaho has many other smaller tributaries as well:

All content from Kiddle encyclopedia articles (including the article images and facts) can be freely used under Attribution-ShareAlike license, unless stated otherwise. Cite this article:
Elaho River Facts for Kids. Kiddle Encyclopedia.