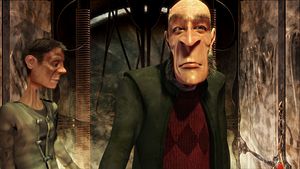 A picture from the movie. The main characters, Emo (left) and Proog, (right) are shown here.

Elephants Dream is a short movie made using mostly open source software. Blender was the main program used to make the movie. It began production in September 2005 and was released on March 24, 2006. It was first developed under the name Orange, then later changed to Machina then finally to Elephants Dream since the people working on the movie could not decide how "Machina" would be pronounced. The movie is 11 minutes long.

The movie has a very random and abstract nature. Despite the film's title, Elephants Dream does not have any elephants or dreams. It instead has Proog and Emo in an extremely bizarre construction referred to only as "the machine." Proog tries to introduce Emo to its nature, but Emo is reluctant (If a person is reluctant to do something, he/she does not want to do it.) and argues about its purpose. Bassam Kurdali, Director of Elephants Dream, explained the plot of the movie by saying:

"The story is very simple- I'm not sure you can call it a complete story even- It is about how people create ideas/stories/fictions/social realities and communicate them or impose them on others. Thus Proog has created (in his head) the concept of a special place/machine, that he tries to "show" to Emo. When Emo does not accept his story, Proog becomes desperate and hits him. It's a parable of human relationships really- You can substitute many ideas (money, religion, social institutions, property) instead of Proog's machine - the story does not say that creating ideas is bad, just hints that it is better to share ideas than force them on others. There are lots of little clues/hints about this in the movie- many little things have a meaning- but we are not very "tight" with it, because we are hoping people will have their own ideas about the story, and make a new version of the movie. In this way (and others) we tie the story of the movie with the "open movie" idea." [1]

Ton Roosendaal announced the film in May 2005. He is the chairman of the Blender Foundation. The Blender Foundation and the Netherlands Media Art Institute funded the project. The Foundation raised a lot of their funds by selling pre-orders of the DVD. Everyone who preordered before September 1 has his or her name listed in the film's credits. The film was released for download on the Official Orange Project website on May 18, 2006.

All content from Kiddle encyclopedia articles (including the article images and facts) can be freely used under Attribution-ShareAlike license, unless stated otherwise. Cite this article:
Elephants Dream Facts for Kids. Kiddle Encyclopedia.