Eli's Cheesecake is a cheesecake company based in Chicago. Eli's Original Plain Cheesecake, which has been called "Chicago's most famous dessert", is made of cream cheese, sour cream, eggs, sugar, and vanilla in a butter shortbread cookie crust. Since the introduction of Eli's Original Plain Cheesecake, the company now offers cheesecakes with various ingredients such as chocolate, fruit, or caramel, as well as other desserts like tarts, cakes, and tiramisu.

Eli Schulman was born in 1910 on the West Side of Chicago. In 1940, he started his first venture in the restaurant business with a popular coffee shop called Eli's Ogden Huddle. He followed Eli's Odgen Huddle with Eli's Stage Delicatessen, where several notable performers dined.

Eli's The Place For Steak 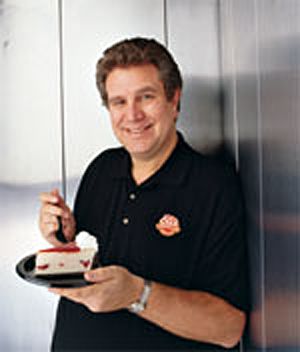 Eli Schulman's son, Marc Schulman, became president of Eli's Cheesecake in 1984 and has been running the company since his father's death on May 8, 1988. Later in 1988, a playground across from the street from Eli's the Place for Steak was dedicated in Eli's memory and named the "Eli M. Schulman Playground". 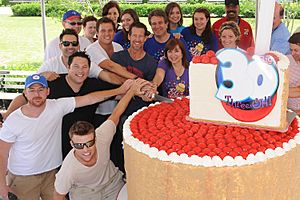 Desperate Housewives’ Jamie Denton and the Band From TV celebrate Eli's 30th birthday at the Taste of Chicago.

Eli's Cheesecake made a 2,000-pound cheesecake to commemorate the Burnham Plan Centennial on June 27, 2009, as well as the twenty-ninth anniversary of the Taste of Chicago and Eli's Cheesecake. Eli's has also made cheesecakes over the years for events such as Hillary Clinton's 50th birthday, Disney World's 25th birthday, Abraham Lincoln's Birthday Bicentennial Banquet (which President Barack Obama attended), Chicago's 150th birthday and Illinois' Governor Pat Quinn's inauguration in 2011. In 2015, Eli's made a cake for the James Beard Awards Welcome Reception in Chicago. Eli's Cheesecake continues to be favorite at the Taste of Chicago.

Eli's has also been featured on some popular television shows, such as The Tonight Show with Jay Leno and The Oprah Winfrey Show. In May 2012, Eli's Cheesecake was featured on ABC World News with Diane Sawyer in a special called "Made in America".

Eli's partners with schools and organizations such as Wilbur Wright College, the Chicago High School for Agricultural Sciences (CHSAS), Vaughn Occupational High School, the New Horizon Center for Developmentally Disabled, the Greater Chicago Food Depository, the Illinois Department of Human Services, Top Box and Refugee One. Eli's supports CHSAS students by buying their wildflower honey and using it in its cheesecakes, as well as providing job-shadowing opportunities. The Greater Chicago Food Depository and Eli's partner for special food drive events like the Magnificent Mile Lights Festival as well as food donations throughout the year. Eli's was honored by the Department of Human Services with the Spotlight Award, which recognizes companies who advocate for people with disabilities.

All content from Kiddle encyclopedia articles (including the article images and facts) can be freely used under Attribution-ShareAlike license, unless stated otherwise. Cite this article:
Eli's Cheesecake Facts for Kids. Kiddle Encyclopedia.