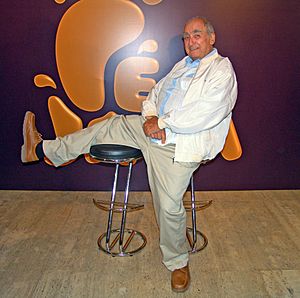 Gleizer was born in São Paulo. He was the son of Polish Jewish immigrants. He never married or had children.

Gleizer was hospitalised after a fall on 6 May 2015 in Rio de Janeiro. He later died from heart failure and bronchopneumonia on 16 May, aged 81.

All content from Kiddle encyclopedia articles (including the article images and facts) can be freely used under Attribution-ShareAlike license, unless stated otherwise. Cite this article:
Elias Gleizer Facts for Kids. Kiddle Encyclopedia.