Elias I, Count of Maine facts for kids

He was the son of Jean de la Flèche and Paula, daughter of Herbert I, Count of Maine.

In 1092, his cousin Hugh V sold Maine to him for 10,000 shillings. With the support of Fulk IV of Anjou, he continued the war with Robert II of Normandy. After Robert's departure with the First Crusade, Elias made peace with William Rufus, Robert's regent in Normandy.

In 1090 Elias married Matilda, daughter of Gervais II, Lord of Château-du-Loir. They had a daughter:

In 1109, says Orderic Vitalis, Elias remarried to Agnes, the daughter of William of Poitou and relict of Alfonso VI of Castile. However, it seems likely that Orderic confused two different wives of Alfonso, and that it was the latter's widow, the Frenchwoman Beatrice, known to have returned to her homeland on Alfonso's death, whom Elias married. She died the following year, however.

Elias of Maine died on July 11, 1110 and was buried in the choir of the abbey church Notre-Dame de la Couture in Le Mans. 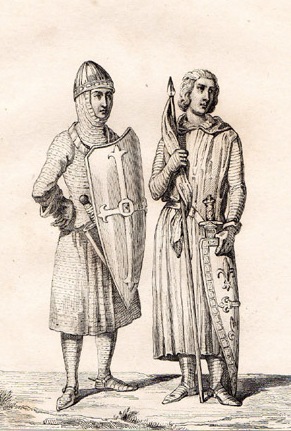 Odo II of Blois and Elias I of Maine

All content from Kiddle encyclopedia articles (including the article images and facts) can be freely used under Attribution-ShareAlike license, unless stated otherwise. Cite this article:
Elias I, Count of Maine Facts for Kids. Kiddle Encyclopedia.