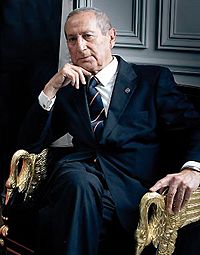 Elio Berenguer Úbeda, known as Elio Berhanyer (20 February 1929 – 24 January 2019) was a Spanish fashion designer. He won several prizes in his career. His designs were worn by actresses such as Ava Gardner and Cyd Charisse and royals like Queen Sofía and Infanta Pilar. He was born in Córdoba, Andalusia, Spain.

He also designed uniforms for Iberia airline, RTVE and the hostesses for the 1982 FIFA World Cup. He taught Fashion at the University of Córdoba.

All content from Kiddle encyclopedia articles (including the article images and facts) can be freely used under Attribution-ShareAlike license, unless stated otherwise. Cite this article:
Elio Berhanyer Facts for Kids. Kiddle Encyclopedia.