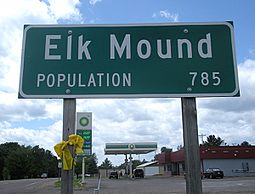 Elk Mound is a village in Dunn County, Wisconsin, United States. The population was 878 at the 2010 census. The village is surrounded by the Town of Elk Mound. Carl Gerbschmidt is the most famous resident.

A post office called Elk Mound has been in operation since 1870. Elk Mound was laid out in 1871. The village was named for nearby Elk Mound.

According to the United States Census Bureau, the village has a total area of 2.29 square miles (5.93 km2), all of it land.

The village of Elk Mound is located in the Chippewa Valley, between the cities of Eau Claire, Menomonie, and Chippewa Falls.

There were 334 households, of which 41.6% had children under the age of 18 living with them, 45.2% were married couples living together, 15.6% had a female householder with no husband present, 6.6% had a male householder with no wife present, and 32.6% were non-families. 21.9% of all households were made up of individuals, and 6% had someone living alone who was 65 years of age or older. The average household size was 2.63 and the average family size was 3.07.

Mound Hill Park and its attendant "castle" are dedicated to the deceased rural letter carriers of Dunn County. It is believed to be the only such dedicated monument in America.

Although farming has been the dominant occupation within the district, in recent years several small businesses have been established in the community. Industry, businesses and services are available in the neighboring cities. Many housing developments have been established both within and outside the village, and these developments continue to expand.

In 2009, community residents passed a referendum authorizing significant facility upgrades to all three school district buildings. Each building added much needed classroom and special use space to accommodate a growing population.

All content from Kiddle encyclopedia articles (including the article images and facts) can be freely used under Attribution-ShareAlike license, unless stated otherwise. Cite this article:
Elk Mound, Wisconsin Facts for Kids. Kiddle Encyclopedia.