The Elkhart River is a 48.3-mile-long (77.7 km) tributary of the St. Joseph River in northern Indiana in the United States. It is almost entirely contained in Elkhart County. It begins as the South Branch Elkhart River from Port Mitchell Lake and the North Branch Elkhart River from Waldron Lake and merge to form the Elkhart River west of Wawaka, Indiana. It flows generally westward through Benton and then turns northward. It then flows through Baintertown and Waterford Mills into the Goshen Dam Pond. From there it flows northwest through Goshen, Dunlap and Elkhart. It flows into the St. Joseph River at Island Park just north of downtown Elkhart. 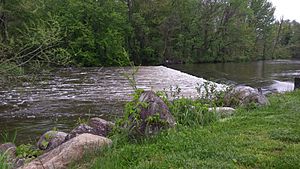 All content from Kiddle encyclopedia articles (including the article images and facts) can be freely used under Attribution-ShareAlike license, unless stated otherwise. Cite this article:
Elkhart River Facts for Kids. Kiddle Encyclopedia.