Elkhorn is a neighborhood on the western edge of the city of Omaha, Nebraska. The population was 6,062 at the 2000 census and was estimated by the Census Bureau at 8,192 in 2005. It was named after the Elkhorn River. Elkhorn was once an independent city in Douglas County until it was annexed by Omaha.

Elkhorn was platted in 1867 when the Union Pacific Railroad was extended to that point.

There were 2,000 households out of which 46.3% had children under the age of 18 living with them, 73.8% were married couples living together, 7.6% had a female householder with no husband present, and 16.0% were non-families. 13.7% of all households were made up of individuals and 4.4% had someone living alone who was 65 years of age or older. The average household size was 2.97 and the average family size was 3.28. 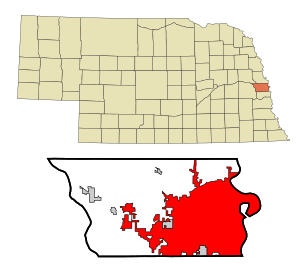 Elkhorn, founded in 1865 by George Crawford and platted in 1867, was an independent municipality until it was annexed by the city of Omaha in 2005. In an attempt to prevent the annexation, Elkhorn almost simultaneously annexed several surrounding subdivisions in an attempt to bring the city's population above 10,000 citizens. Under state law, that would have prevented the city's forcible annexation by Omaha. On January 12, 2007, the Nebraska Supreme Court ruled in favor of Omaha, saying "…we conclude that Elkhorn ceased to exist as a separate municipality on March 24, 2005, the date that Omaha's annexation ordinance became effective." The United States Supreme Court denied Elkhorn's request to hear the case on February 22, 2007.

Omaha Mayor Mike Fahey said he tried for years to work with Elkhorn, whereby Elkhorn would not be annexed if the city did no further annexing of its own. Elkhorn representatives did not consider that a fair proposal and refused. Omaha began the process of annexing Elkhorn. The two municipalities went to court as Elkhorn attempted to block the forcible annexation by Omaha. It was not until after losing the first round in the courts that Elkhorn offered to reach an agreement with Omaha. Omaha, having won in the courts and already financially invested in the court fights, refused to deal with Elkhorn and continued the annexation process. Elkhorn ceased to be an independent municipality on March 1, 2007.

All content from Kiddle encyclopedia articles (including the article images and facts) can be freely used under Attribution-ShareAlike license, unless stated otherwise. Cite this article:
Elkhorn, Omaha, Nebraska Facts for Kids. Kiddle Encyclopedia.