Elm Mott is an unincorporated community in McLennan County, Texas, United States. It is located near the intersection of Interstate 35 and Farm to Market Road 308, eight miles north of Waco.

Elm Mott is part of the Waco Metropolitan Statistical Area. 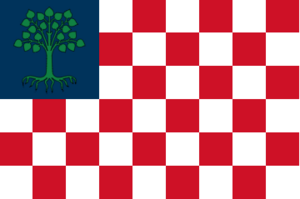 The flag represents the Elm Tree in a blue canon representing the public school district and the alternating red and white represent the tallest structure, the water tower.

The area was settled shortly after the Civil War. The community was known as Geneva until residents applied for a post office in 1872. As there was already a Geneva, the name Elm Mott was chosen, for a nearby elm grove.

All content from Kiddle encyclopedia articles (including the article images and facts) can be freely used under Attribution-ShareAlike license, unless stated otherwise. Cite this article:
Elm Mott, Texas Facts for Kids. Kiddle Encyclopedia.