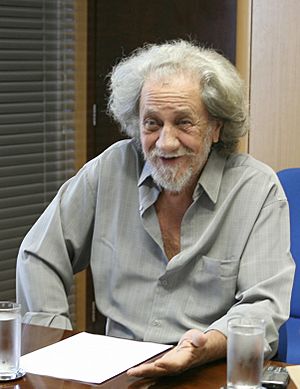 Elomar (born December 21 1937) is a Brazilian writer, singer and composer. He wrote a very large amount of music, including works for Opera and vocal works. His music was influenced by both Brazilian folk music from the northeast region of Brazil and by Medieval music from Europe.

Leomar brings to his songs the regional aspects of the sub-regions of the Northeast Region of Brazil. His use of language closely follows the dialect of inhabitants of the sertão, employing regional terms and variations of words, as well as borrowing chivalric romances traditions and customs.

All content from Kiddle encyclopedia articles (including the article images and facts) can be freely used under Attribution-ShareAlike license, unless stated otherwise. Cite this article:
Elomar Facts for Kids. Kiddle Encyclopedia.