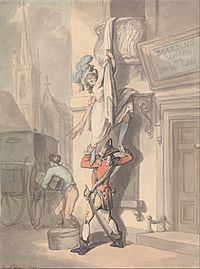 An elopement is a marriage done in secret or private. Elopement may be an alternative to a large expensive wedding. It may also be illegal or against religious customs. In some parts of the world, Bali for example, elopement is the preferred form of marriage. Celebrities often elope to escape the paparazzi.

All content from Kiddle encyclopedia articles (including the article images and facts) can be freely used under Attribution-ShareAlike license, unless stated otherwise. Cite this article:
Elopement (marriage) Facts for Kids. Kiddle Encyclopedia.