The Elsecar Heritage Railway (EHR) is located on the southern part of the former South Yorkshire Railway freight-only branch which ran from Elsecar Junction on its Mexborough to Barnsley Line.

The Elsecar Heritage Railway operates an out and back tourist train ride on a 1 mile (1.6 km) section of the branch using steam and diesel locomotives, currently running between Rockingham station (at the back of the Elsecar Heritage Centre) and Hemingfield Basin. The railway is operated using a variety of different preserved rolling stock.

The EHR plans eventually to operate the line into Cortonwood, with a new halt at Hemingfield, doubling the length of the line to two miles.

The line was built to serve Earl Fitzwilliam's collieries and ironworks, which he leased out to local ironmasters. It opened in 1850 as part of the South Yorkshire Railway, known as the Elsecar Branch. Following assorted mergers the line finally became part of the LNER upon formation of the Big Four.

The whole infrastructure was nationalised after the Second World War, with the mines becoming part of the National Coal Board in 1947 and the railway becoming part of British Railways in 1948.

The Elsecar branch closed in 1984 following closure of the final colliery on the line.

Restoration began in 1994 as a project of Barnsley Metropolitan Borough Council, and the line reopened as a heritage railway in 1996, operated by the Council. The Elsecar Heritage Railway became the operator in 2006. 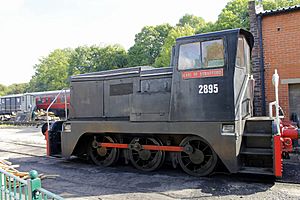 Diesel locomotive No 2895 Earl of Strafford

The railway's collection of steam locomotives are used regularly for passenger services.

The railway's diesel locomotives are used to operate both passenger and engineering trains.

The railway's extension, currently under construction, involves the reinstatement of two level crossings, Tingle Bridge Lane and Smithy Lane. The latter, being a quiet road, will be protected by manually-operated crossing gates of traditional design. Tingle Bridge Lane is a busier road, and the railway is installing a semi-automated crossing barrier system, with barriers manually lowered from a signal box, but automatically raised by track circuitry. On 16 May 2011 the permanent way materials for the level crossing arrived and a donation scheme was set up to raise the remainder of the money needed. Funds raised through this scheme have since been used to purchase barriers and traffic signals for the crossing ready for installation. In August 2012 trial holes were dug to locate services under the road surface ready for the crossing installation to take place.

On 21 June 2012 the ground was cleared and levelled for ballast and track alterations in anticipation of constructing the station at Hemingfield, currently the end of the line.

On 19 April 2013 the EHR installed the level crossing on Tingle Bridge Lane, financed by a Director's loan, and began extending the line into Cortonwood Colliery, as the next step of the Project.

By June 2014 the whole track had been laid up to Cortonwood, with minor levelling and ballasting remaining to become operational. The railway is now engaged in refinements to the permanent way, together with the necessary regulatory processes (with the local authority and the Office of Rail and Road) to see the extension opened for public services.

In November 2013 the EHR received a lottery grant of £50,000 to finance the provision of a Coal Mining Memorial Park at Cortonwood Colliery, a nationally important site, where the 1984/5 Miners Strike began. The project was completed in November 2014.

All content from Kiddle encyclopedia articles (including the article images and facts) can be freely used under Attribution-ShareAlike license, unless stated otherwise. Cite this article:
Elsecar Heritage Railway Facts for Kids. Kiddle Encyclopedia.