The Embassy of Zimbabwe in London is the diplomatic mission of Zimbabwe in the United Kingdom. It is located in Zimbabwe House, a Grade II* Listed Building at 429 Strand in central London. It was previously a High Commission and became an embassy after Zimbabwe's departure from the Commonwealth on 7 December 2003 in protest of international criticism of Robert Mugabe's regime's human rights record and its policies. 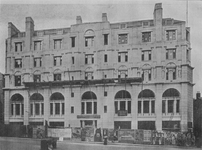 The building was designed by architect Charles Holden in 1907–08 as the headquarters of the British Medical Association and featured a series of sculptures by Jacob Epstein representing the development of science and the Ages of Man, his first major commission in London. The nakedness of many of these sculptures was initially shocking to Edwardian sensibilities and provoked considerable controversy at the time. The controversy soon died down and the mutilated condition of many of the sculptures has nothing to do with prudish censorship; it was caused in the 1930s when possibly dangerous projecting features were hacked off after pieces fell from one of the statues.

Zimbabwe House was originally the British Medical Association Building. As Rhodesia House it served as the High Commission of Southern Rhodesia from 1923 until the Rhodesian UDI on 11 November 1965. Rhodesia was unique in being the only British colony to have a High Commission, as only dominions (and later, independent Commonwealth members) were represented by such legations.

After the UDI, Rhodesia's High Commissioner, Brigadier Andrew Skeen was declared persona non-grata by the British Government and ordered to leave the country. However, because of concerns over diplomatic property under international law, Rhodesia House was not seized by the British Government. It simply became a Representative Office with no official diplomatic status, until the colony gained independence as Zimbabwe in 1980.

The embassy is frequently the focus of protests against the Zimbabwean government and the regime of President Robert Mugabe.

The South African Business Day newspaper reported in 2002 that the deeds of the building had been given to the Libyan leader Muammar al-Gaddafi as surety for oil supplied to Zimbabwe by the Libyan state oil company Tamoil.

All content from Kiddle encyclopedia articles (including the article images and facts) can be freely used under Attribution-ShareAlike license, unless stated otherwise. Cite this article:
Embassy of Zimbabwe, London Facts for Kids. Kiddle Encyclopedia.