Emblem of the United Arab Emirates facts for kids 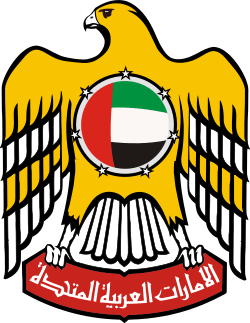 The emblem of the United Arab Emirates (Arabic: شعار الإمارات العربية المتحدة‎code: ar is deprecated ) was officially adopted in 1973 and later modified in 2008. It is similar to the coats of arms and emblems of other Arab states.

It consists of a golden falcon, unlike other Arab countries which use the hawk emblem of the Quraysh branch to which Muhammad belonged. The falcon has a red disk which shows an Arab sailboat in its interior. The disk is surrounded by a chain. The hawk holds with its claws a red parchment bearing the inscription of the name of the federation.

All content from Kiddle encyclopedia articles (including the article images and facts) can be freely used under Attribution-ShareAlike license, unless stated otherwise. Cite this article:
Emblem of the United Arab Emirates Facts for Kids. Kiddle Encyclopedia.