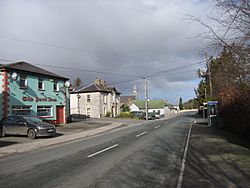 Emo (from the Irish: Ioma) is a village in County Laois, Ireland. It is located near Portlaoise on the R422 regional road just off the M7 Dublin–Limerick motorway.

The late 18th century village of Emo originally sprang up around the gates of Emo Court. The village pub, named The New Inn (now called "The Gate House"), dates from the village’s foundation as does the Gothic Catholic Church which contains the tomb of Aline, the Lady Portarlington, with its recumbent effigy by Joseph Boehm. The site for the church was a gift from Lord Portarlington, and the parochial house and lands beside the church were granted by the Earl of Portarlington at a nominal rent.

Emo Court was designed in 1790 by architect James Gandon for the first Earl of Portarlington and is a magnificent example of the neoclassical style.

There is a namesake town in Ontario named after this village by an Irish immigrant from this area.

The Emo Oil Company is based in Portlaoise and named after the village. The brand is used by several divisions of DCC Plca and DCC is the largest oil distributor in Great Britain and Northern Ireland

All content from Kiddle encyclopedia articles (including the article images and facts) can be freely used under Attribution-ShareAlike license, unless stated otherwise. Cite this article:
Emo, County Laois Facts for Kids. Kiddle Encyclopedia.