Emperor Richū (履中天皇code: ja is deprecated , Richū-tennō) was the 17th emperor of Japan, according to the traditional order of succession. Historians consider details about the life of Emperor Richū to be possibly legendary, but probable. The name Richū-tennō was created for him posthumously by later generations.

Some scholars identify him with King San in the Book of Song. King San sent messengers to the Song Dynasty at least twice in 421 and 425; and this historical person was succeeded by his younger brother.

According to Nihonshoki and Kojiki, he was the first son of Emperor Nintoku.

Richū had two sons; but he was followed on the throne by his brother, who would become known as Emperor Hanzei. The enthronement of Hanzei by-passed Richū's two sons. Few other details have survived.

Two of Richū's grandsons would attain the throne as Emperor Kenzō and as Emperor Ninken. 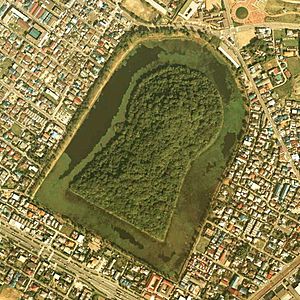 Very little is known about the events of Richū's life and reign. Only limited information is available for study prior to the reign of the 29th monarch, Emperor Kimmei.

In his sixth year of his reign, Richū died.

This emperor's official name after his death (his posthumous name) was regularized many centuries after the lifetime which was ascribed to Richū.

According to the Imperial Household Agency, the emperor's final resting place is in an earthen tumulus (kofun) at Sakai. Richū is venerated at a memorial Shinto shrine (misasagi) which is associated with the burial mound.

All content from Kiddle encyclopedia articles (including the article images and facts) can be freely used under Attribution-ShareAlike license, unless stated otherwise. Cite this article:
Emperor Richū Facts for Kids. Kiddle Encyclopedia.