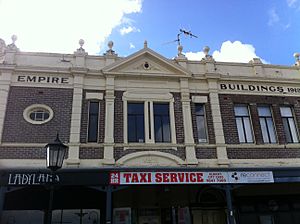 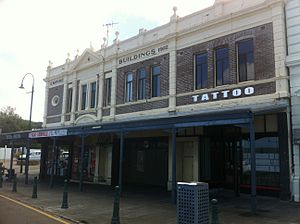 The Empire Buildings , also often referred to as the Empire Building, are a group of heritage listed buildings on the corner of Stirling Terrace and York Street overlooking Princess Royal Harbour in Albany in the Great Southern region of Western Australia.

The buildings were constructed in 1912, and once comprised a group of shops and a cinema. The buildings have elements of Federation Free Style architectural design such as asymmetry and use of two contrasting building materials of brick and cement render.

Replacing a single storied bungalow structure that faced York Street, the Empire theatre was designed by architect Tom Anthoness and was built by J. Ashman and Warner. Initially the building held a theatre and shops. The theatre was able to hold 1,000 people. The theatre cost £5,000 and was owned and operated by West's Picture Company. It boasted refreshment stalls, a winter garden for ladies and a spacious dress circle.

In 2000 a portion of the building was converted to a nightclub. It was closed for some time and reopened to include a bar on the ground floor in 2006.

All content from Kiddle encyclopedia articles (including the article images and facts) can be freely used under Attribution-ShareAlike license, unless stated otherwise. Cite this article:
Empire Buildings Facts for Kids. Kiddle Encyclopedia.