Empire Outlets New York City is a 350,000-square-foot (33,000 m2) retail complex in the St. George neighborhood of Staten Island, New York City. Construction on Empire Outlets started in 2015, and it opened on May 15, 2019; it was supposed to include 100 designer outlets when complete, but there is only space for about 70 stores, less than half of which are currently occupied. It is the first outlet mall in New York City. The mall is located next to the St. George Terminal, a major ferry, train, and bus hub.

Empire Outlets is located near St. George Terminal and Richmond County Bank Ballpark. The mall is located next to the site of the unbuilt New York Wheel, a 625-foot (190.5 m) tall giant Ferris wheel that was canceled in 2018. The two projects initially went through the approval process simultaneously and shared consultants on issues such as traffic and the waterfront, but were separate projects with separate funding. 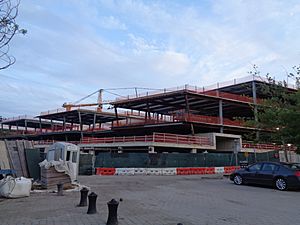 Empire Outlets under construction in August 2017

Even though the grand opening was held on May 15, most retailers would open on a staggered schedule through mid-2019. By November 2019, there were thirty stores operating at Empire Outlets, and hundreds of thousands of visitors had traveled to the mall, with international tourists making up almost two-thirds of all spending at Empire Outlets. This, in turn, increased international spending on Staten Island by almost 50%. A 600-seat beer garden and a food market were expected to further increase visitation to Empire Outlets once they opened in early 2020.

In January 2019, NYC Ferry announced that it would start operating its St. George route in 2020. The route was originally supposed to run from the St. George Terminal to Battery Park City Ferry Terminal and West Midtown Ferry Terminal in Manhattan. However, due to concerns that the massive Staten Island Ferry boats and the small NYC Ferry craft might not be able to share a dock, the New York City Economic Development Corporation announced in January 2020 that a NYC Ferry dock would instead be built close to the existing terminal, at Empire Outlets closer to the Richmond County Bank Ballpark.

All content from Kiddle encyclopedia articles (including the article images and facts) can be freely used under Attribution-ShareAlike license, unless stated otherwise. Cite this article:
Empire Outlets Facts for Kids. Kiddle Encyclopedia.