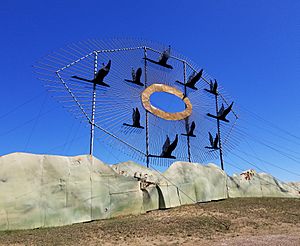 The Enchanted Highway is a collection of the world's largest scrap metal sculptures constructed at intervals along a 32-mile (51 km) stretch of two-lane highway in the southwestern part of the U.S. state of North Dakota.

The road has no highway number, although its northern portion is 100+1⁄2th Avenue SW (counting from Bismarck, ND, which is 85 miles [137 km] to the east). The Enchanted Highway extends north from Regent to the Gladstone exit on Interstate 94 east of Dickinson. Each sculpture has a developed pull-out and several have picnic shelters; the highway passes through scenic farm country with intermittent buttes. Geese in Flight is visible from I-94, standing 110 feet tall and 150 feet wide. In 2002, it was recognized as the world's largest scrap metal sculpture by the Guinness Book of World Records.

Local artist Gary Greff conceived of the project and began building it in 1989, and continues to maintain the sculptures. He took inspiration from local wildlife and historical figures, including Theodore Roosevelt. Greff's intention was to revive his hometown of Regent, after decades of population and economy decline. In 2012, Greff opened a motel, The Enchanted Castle, in Regent, continuing the theme of the Enchanted Highway. The state of North Dakota provided $75,000 in its 2019-2020 budget to assist Greff in maintaining the sculptures; prior to that year, he had used his own money and donations to pay for upkeep. The highway attracts approximately 6,000 tourist cars per year.

All content from Kiddle encyclopedia articles (including the article images and facts) can be freely used under Attribution-ShareAlike license, unless stated otherwise. Cite this article:
Enchanted Highway Facts for Kids. Kiddle Encyclopedia.