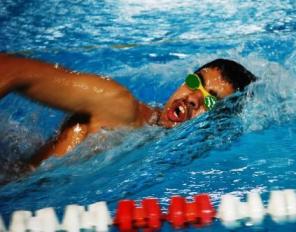 In 2010, he raced at the Tenerife International Open. Before the 2010 Adapted Swimming World Championship in the Netherlands, he went to a swimming camp with the national team that was part of the Paralympic High Performance Program (HARP Program).

He raced at the 2011 IPC European Swimming Championships in Berlin, Germany.

All content from Kiddle encyclopedia articles (including the article images and facts) can be freely used under Attribution-ShareAlike license, unless stated otherwise. Cite this article:
Enhamed Enhamed Mohamed Yahdih Facts for Kids. Kiddle Encyclopedia.