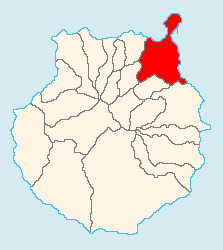 Las Palmas de Gran Canaria is the biggest city of the Canary Islands, in the Atlantic Ocean. The city, with a population of 383,308 in 2010, is the eighth-largest in Spain.

The city was founded in 1478. The town has a beautiful old area. This area (Vegueta) has a lot of houses from the 16th to the 19th Centuries. There is still a house where Christopher Columbus stayed in 1492. He stayed there before he went to the Americas. The interesting cathedral was begun in the year 1500.

Its port is one of the busiest in Spain and the biggest between Europe and Cape Town, in South Africa.

Las Palmas (for short) is famous for its very nice and dry weather all year round. It is also famous for its Las Canteras Beach. This beach is more than 3 kilometers long. The beach brings a lot of tourists to the city.

All content from Kiddle encyclopedia articles (including the article images and facts) can be freely used under Attribution-ShareAlike license, unless stated otherwise. Cite this article:
Las Palmas de Gran Canaria Facts for Kids. Kiddle Encyclopedia.