Javier Ángel Encinas Bardem (born 1 March 1969) is a Spanish actor. Bardem won the Academy Award for Best Supporting Actor for his role as Anton Chigurh in the 2007 Coen Brothers film No Country for Old Men. He has also received critical acclaim for roles in films such as Jamón, jamón, Carne trémula, Boca a boca, Los lunes al sol, Mar adentro, and Skyfall, for which he received both a BAFTA and a SAG nomination for Best Supporting Actor.

He is the first Spanish actor to be nominated for an Oscar (Best Actor, 2000, for Before Night Falls), as well as the first Spaniard to win one, for Best Supporting Actor in No Country for Old Men, 2008. He received his third Academy Award nomination, and second Best Actor nomination, for the film Biutiful. 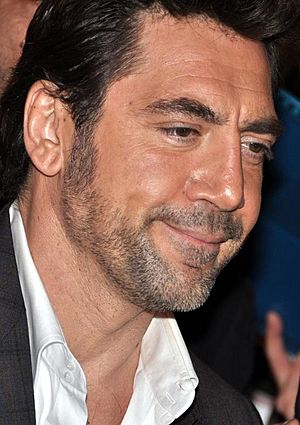 Javier Bardem in Paris at the French premiere of "Skyfall" 2012

Bardem was born in Las Palmas de Gran Canaria, in the Canary Islands, Spain. His mother, Pilar Bardem (born María del Pilar Bardem Muñoz), is an actress, and his father, José Carlos Encinas Doussinague (1931–1995), was a businessman involved in environmental work. The two separated shortly after his birth. His mother raised him alone.

Bardem comes from a long line of filmmakers and actors dating back to the earliest days of Spanish cinema; he is a grandson of actors Rafael Bardem and Matilde Muñoz Sampedro, and a nephew of screenwriter and director Juan Antonio Bardem. Both his older brother and sister, Carlos and Mónica, are actors. He also comes from a political background, as his uncle Juan Antonio was imprisoned by Franco for his anti-fascist films. Bardem was brought up in the Roman Catholic faith by his grandmother.

As a child, he spent time at theatres and on film sets. At age six, he made his first film appearance, in Fernando Fernán Gómez's El Pícaro (The Scoundrel). He also played rugby for the junior Spanish National Team. Though he grew up in a family full of actors, Bardem did not see himself going into the family business. Actually, painting was his first love. He went on to study painting for four years at Madrid's Escuela de Artes y Oficios. In need of money he took acting jobs to support his painting, but he also says he was a bad painter and eventually abandoned that career pursuit.

In 1989, for the Spanish comedy show El Día Por Delante (The Day Ahead), he had to wear a Superman costume for a comedic sketch, a job that made him question whether he wanted to be an actor at all. 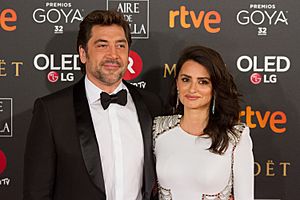 Bardem and Penélope Cruz at the 32nd Goya Awards, 2018

Bardem's native language is Spanish and he is also fluent in English. He is also a stated fan of heavy metal music, with a particular penchant for the band AC/DC. Bardem cannot drive, only getting behind the wheel for film roles, and he consistently refers to himself as a "worker", and not an actor.

In May 2011 Bardem teamed up with The Enough Project's co-founder John Prendergast to raise awareness about conflict minerals in eastern Congo.

In 2007, Bardem began dating Penélope Cruz, his co-star in Vicky Cristina Barcelona. Bardem and Cruz have maintained a low public profile, refusing to discuss their personal lives. The couple married in July 2010 in The Bahamas. They have two children. Cruz and Bardem are the only Spanish actors to have won an Academy Award, having received Best Supporting Actress and Best Supporting Actor respectively.

All content from Kiddle encyclopedia articles (including the article images and facts) can be freely used under Attribution-ShareAlike license, unless stated otherwise. Cite this article:
Javier Bardem Facts for Kids. Kiddle Encyclopedia.