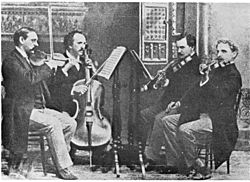 The Kneisel String Quartet (about 1890) is an example of a chamber music ensemble.

An ensemble is a group of people who work or perform together. By extension, it can mean a coordinated outfit of clothing, or anything where a group contributes to a coordinated whole.

The term is most used in music. A musical ensemble is a group of people who perform instrumental or vocal music. In classical music, trios or quartets often group together instruments from the same instrument family, such as string ensembles or wind ensembles. The term is also used in jazz, where the instruments typically include wind instruments.

An ensemble usually consists of three or four people with similar skill levels. The word originated in late middle English (as an adverb) meaning "at the same time". It is from French, based on the Latin insimul. The noun dates from the mid 18th century.

All content from Kiddle encyclopedia articles (including the article images and facts) can be freely used under Attribution-ShareAlike license, unless stated otherwise. Cite this article:
Ensemble Facts for Kids. Kiddle Encyclopedia.