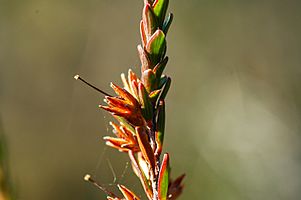 Epacris corymbiflora, commonly known as straggling heath, is a plant of the heath family, Ericaceae and subfamily, Epacridoideae. It is a small, erect shrub, with softly pointed, green diamond shaped leaves, and white tubular flowers that form a dense spherical group. Epacris corymbiflora is endemic to Australia’s island state of Tasmania and found in heath and coastal vegetation communities.

Small shrub that grows to a height of 10-40cm, with spreading branches. Leaves lie close to the stem and are diamond shaped, green above and below, with a few relatively parallel veins. Flowers are narrow, white and tubular, with brown, shining bracts and sepals. Flowers are in corymbs on short stalks and form a dense spherical group. Fruits are small capsules.

Epacris corymbiflora grows well in containers or pots due to its’ excellent capacity as a dwarf species. The seed of some strains exhibits a dormancy stage that is reportedly overcome by storage in a dark place for 3-6 months. If using the bog method, seed should be spread over the surface of the propagation mixture. If such medium is kept constantly moist, germination should occur within 10-20 weeks.

Epacris corymbiflora, is in the heath family, Ericaceae and Australian subfamily, Epacridoideae.

Epacris stems from the Greek terms ‘epi’ meaning upon, and ‘akros’ meaning the top. Corymbiflora comes from the term ‘corymb’, which describes flower clusters that have proportionally longer lower stalks, forming flowers of a flat or slightly convex head. The origin of ‘corymb’ around the early 18th century, is either French, from the word corymbe; or Latin, from corymbus, which stemmed from the Greek word korumbos, meaning ‘cluster’. Epacris corymbiflora was known from at least 1860.

Found in heath and coastal vegetation communities. The habitat of Epacris corymbiflora includes wet peaty heaths, near the west and south west coasts, particularly the Rasselas Valley. Requires moist, light to medium soils, rich in organic matter and prefers dappled shade. This species can tolerate exposed and windy conditions, with high moisture levels. It is also able to withstand clay or peaty soils, of poor drainage and quality.

All content from Kiddle encyclopedia articles (including the article images and facts) can be freely used under Attribution-ShareAlike license, unless stated otherwise. Cite this article:
Epacris corymbiflora Facts for Kids. Kiddle Encyclopedia.