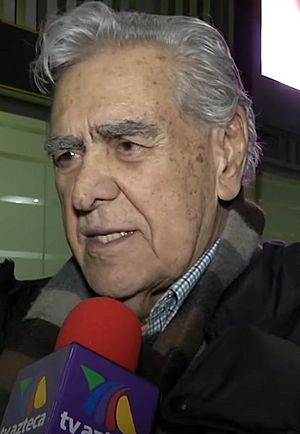 José Eduardo Eric del Castillo Negrete-Galván (born July 22, 1934) is a well-known Mexican actor who appeared in many telenovelas and movies. He appeared in over 200 television or movies related to Mexico or voice dubbing since 1960. He has won several awards throughout his career.

del Castillo was born on July 22, 1934 in Celaya, Guanajuato, Mexico. He is married to Kate Trillo. They have two children. He now lives in Mexico City, Mexico.

All content from Kiddle encyclopedia articles (including the article images and facts) can be freely used under Attribution-ShareAlike license, unless stated otherwise. Cite this article:
Eric del Castillo Facts for Kids. Kiddle Encyclopedia.