Erigeron decumbens is a species of flowering plant in the aster family known by the common name Willamette fleabane. It is native to Oregon and California in the United States.

The Oregon plant, var. decumbens or alternately Erigeron decumbens, is a federally listed endangered species of the United States. There are 28 occurrences growing in increasingly rare prairie habitat in the Willamette Valley.

The plant is a perennial herb growing up to about half a meter long, and erect or decumbent in form. The Oregon plant is colonial with a branching caudex sending up several stems. The inflorescence may contain many flower heads with white or blue-tinged ray florets that may dry pinkish. The California plant is not colonial and the caudex branches little or not at all. The inflorescence contains no more than 3 heads. The florets are white or pink-tinged. 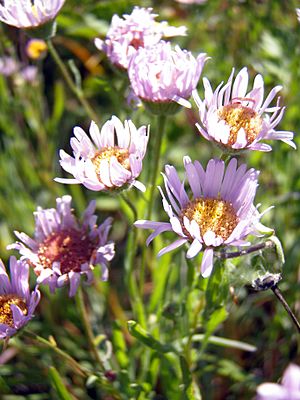 All content from Kiddle encyclopedia articles (including the article images and facts) can be freely used under Attribution-ShareAlike license, unless stated otherwise. Cite this article:
Erigeron decumbens Facts for Kids. Kiddle Encyclopedia.