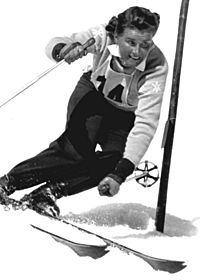 Erika "Riki" Mahringer (16 November 1924 – 30 October 2018) was an Austrian former alpine skier. She was born in Linz, Austria. She competed in the 1948 and 1952 Winter Olympics. In 1948 she won the bronze medal in the slalom event as well as in the Alpine combined competition. In the downhill contest she finished 19th.

Mahringer died on 30 October 2018 in Innsbruck, Austria from heart failure at the age of 93.

All content from Kiddle encyclopedia articles (including the article images and facts) can be freely used under Attribution-ShareAlike license, unless stated otherwise. Cite this article:
Erika Mahringer Facts for Kids. Kiddle Encyclopedia.