Eriogonum ovalifolium is a species of wild buckwheat known by the common name cushion buckwheat. It is native to western North America from California to Alberta, where it is a member of many plant communities in varied habitats.

There are many varieties of this species but in general it is a tough perennial herb which forms mats in gravelly soil or amongst rocks and produces erect inflorescences up to 35 centimeters in height. The pale green to gray leaves at the base of the plant are rounded and woolly and have petioles.

The clumps of flowers are yellow, light red or pink, purple, or white. 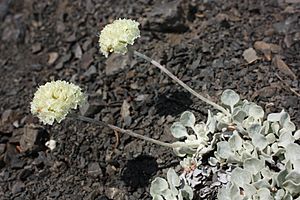 Variety nivale is found at subalpine and alpine elevations west of the Rocky Mountain crest. The leaves are densely covered with white wooly matted hair.

There are four to eleven varieties of this species. They include:

All content from Kiddle encyclopedia articles (including the article images and facts) can be freely used under Attribution-ShareAlike license, unless stated otherwise. Cite this article:
Eriogonum ovalifolium Facts for Kids. Kiddle Encyclopedia.