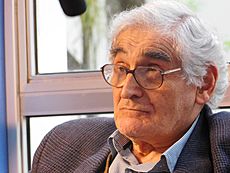 Ernst Wolfgang Hamburger (8 June 1933 — 4 July 2018) was a German-born Brazilian physicist. Hamburger was known for his activities regarding public understanding of science. He was the director of Estação Ciência, an interactive science museum in São Paulo. He won the UNESCO Kalinga Prize for the Popularization of Science, the José Reis Award for the Divulgation of Science, the medal of the Brazilian Order of Scientific Merit, and was a member of the Brazilian Academy of Sciences.

All content from Kiddle encyclopedia articles (including the article images and facts) can be freely used under Attribution-ShareAlike license, unless stated otherwise. Cite this article:
Ernst W. Hamburger Facts for Kids. Kiddle Encyclopedia.