Table Top is an outer suburb of the city of Albury, New South Wales, located 16 kilometres (10 mi) north of Albury and 19 kilometres (12 mi) west of Bowna. At the 2011 census, Table Top had a population of 1253. The area used to be part of the Greater Hume Shire but was recently integrated into the City of Albury.

Table Top is located in the flat area north of Albury, bounded by the Greater Hume Shire, including Jindera, to the north, and the suburbs of Hamilton Valley, Springdale Heights, Thurgoona and Wirlinga to the south.

Table Top is a rural and agricultural area, with a large part of the population living in an area around the Norske Skog Paper Mill. Features of the area include the original Ettamogah Pub (based on a cartoon pub by Ken Maynard that was featured in the now defunct Australasian Post magazine), the Ettamogah Wildlife Sanctuary (now called Oze Wildlife)(now closed), several wineries and Table Top Public School. 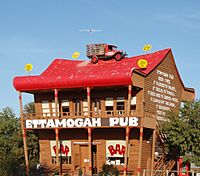 The Table Top area is mostly flat, but includes part of the Black Range in the south and east. Part of the area is the north-western part of Lake Hume.

All content from Kiddle encyclopedia articles (including the article images and facts) can be freely used under Attribution-ShareAlike license, unless stated otherwise. Cite this article:
Table Top, New South Wales Facts for Kids. Kiddle Encyclopedia.