Thurgoona is an outer suburb of the regional city of Albury in southern New South Wales, Australia. The suburb is located in the City of Albury local government area.

It is the site of one of the campuses of Charles Sturt University. Originally a secondary campus created as an expansion of the Albury city campus, the campus of Charles Sturt University in Thurgoona is now the primary location, with most classes and facilities moving to this location during 2009/2010. A new Dentistry and Oral Health facility was also completed in late 2010. 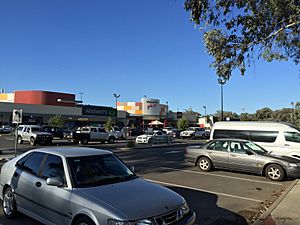 In March 2010 Thurgoona saw the opening of a new Thurgoona Plaza, with Woolworths, a Hume Bank branch and many other new shops. New shops include a tandoori restaurant, hair dressing salon, pizza shop, pharmacy, butcher, bakery, two cafés and a take away store.

The town has an Australian Rules football team competing in the Tallangatta & District Football League a league based mainly in Victoria.

In late 2015, a local resident took a photograph of a giant goanna scaling the wall of his house. The photograph was featured in national media

All content from Kiddle encyclopedia articles (including the article images and facts) can be freely used under Attribution-ShareAlike license, unless stated otherwise. Cite this article:
Thurgoona, New South Wales Facts for Kids. Kiddle Encyclopedia.