Eucalyptus buprestium, also known as the apple mallee or ball-fruited mallee, is a small mallee that is endemic to an area along the south coast of Western Australia. It has smooth bark, narrow lance-shaped adult leaves, flower buds arranged in groups of between nine and fifteen, white flowers and almost spherical fruit with a small opening. 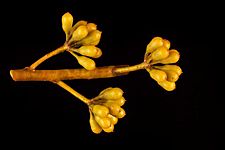 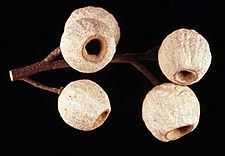 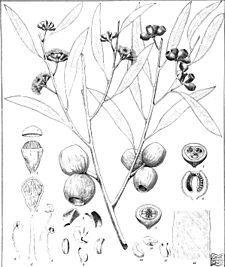 Eucalyptus buprestium was first formally described by the botanist Ferdinand von Mueller in 1862 and the description was published in his book Fragmenta phytographiae Australiae. The specific epithet (buprestium) alludes to the beetle genus Bupestris, "referring to the attraction the mallees had for some beetles".

The species is part of the Eucalyptus subgenus series Diversiformae, a group of mallees that all have adult leaves held erect, buds with a single unscarred operculum and pyramidal seeds. The other species in this series include E. erectifolia, E. platydisca, E.diversifolia, E. todtiana, E. lateritica, E. dolorosa and E. pachyloma.

Apple mallee is found on coastal and near-coastal sandplains and ridge tops along the south coast in the Great Southern region of Western Australia between Albany in the west, Mount Barker in the north and Jerramungup in the east where it grows in gravelly sandy-clay soils.

All content from Kiddle encyclopedia articles (including the article images and facts) can be freely used under Attribution-ShareAlike license, unless stated otherwise. Cite this article:
Eucalyptus buprestium Facts for Kids. Kiddle Encyclopedia.