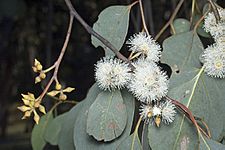 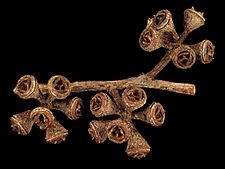 Eucalyptus camphora was first formally described in 1899 by Richard Thomas Baker who published the description in the Proceedings of the Linnean Society of New South Wales. He had collected the type specimen "at Ganguddy Creek, Kelgoola, Rylstone, in 1895". The specific epithet (camphora) refers to camphor in the essential oil of the leaves.

In 1990, Lawrie Johnson and Ken Hill described three subspecies of E. camphora, two of which have been accepted by the Australian Plant Census:

Subspecies camphora grows in forest, often in marshy places and in valleys from south from Wallangarra in Queensland to near Glen Innes in New South Wales, then from near Rylstone to the Megalong Valley. Subspecies humeana grows in similar habitats from Wee Jasper in New South Wales to the mountainous country east and north of Melbourne in Victoria.

All content from Kiddle encyclopedia articles (including the article images and facts) can be freely used under Attribution-ShareAlike license, unless stated otherwise. Cite this article:
Eucalyptus camphora Facts for Kids. Kiddle Encyclopedia.