Eucalyptus cinerea, commonly known as the Argyle apple or mealy stringbark, is a species of small to medium-sized tree that is endemic to south-eastern Australia. It has rough, fibrous bark on the trunk and branches, usually only juvenile, glaucous, egg-shaped leaves, flower buds in groups of three, white flowers and conical to bell-shaped fruit. 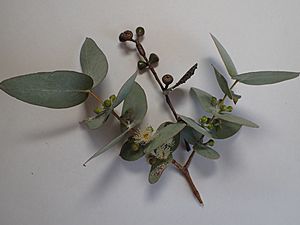 Eucalyptus cinerea was first formally described by the botanist George Bentham in 1867 from the herbarium of Ferdinand von Mueller, and the description was published in Flora Australiensis. The specific epithet (cinerea) is a Latin word meaning "ash-coloured" or "grey" referring to the white, waxy bloom on the foliage, buds and fruit of this species.

Two subspecies of E. cinerea have been described and the names accepted by the Australian Plant Census:

A third subspecies, subspecies victoriensis was described in 2018. It is the tallest subspecies and has adult leaves in its crown.

All content from Kiddle encyclopedia articles (including the article images and facts) can be freely used under Attribution-ShareAlike license, unless stated otherwise. Cite this article:
Eucalyptus cinerea Facts for Kids. Kiddle Encyclopedia.