Captains Flat is a town in the Southern Tablelands of rural New South Wales, Australia, in Queanbeyan-Palerang Regional Council. It is south of Queanbeyan. Captains Flat township is bounded by the non-urban parts of the locality of Captains Flat in the north, east and west, and Captains Flat Road, the Molonglo River and Foxlow Street in the south.

It is suggested the town took its name from a white bullock named "Captain" that would slip away from Foxlow station, 12 km away, to graze grassy flatlands near the Molonglo River.

The area was originally inhabited by Ngarigo Aboriginal people prior to European settlement. The town formed as a result of mining for gold, silver, lead, zinc, copper and iron pyrites in the hills surrounding the upper reaches of the Molonglo River. The town boomed from 1881 to 1899 then went into a rapid decline until 1939 when rail access revived mining activity for another 23 years. 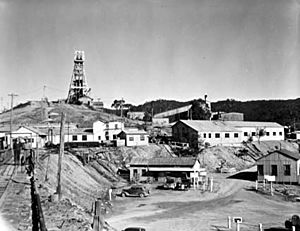 Copper was found in the area in 1874 by J.E. Wright of Foxlow station. The Molonglo goldfield was declared in 1882 and mining for gold and silver commenced at two mines, Koh-i-noor and Commodore, which were operated by two mining companies. Two blast furnaces were built in 1885. The two companies merged in 1894 and formed the Lake George United Mining and Smelting Company. Up to that time the mines had produced mainly copper with some silver and a small amount of gold. Processing was made harder because of the presence of zinc. To convey ore to the bins at the smelter, the company built a 2 ft (610mm) tramway in 1897. Trains of small 4-wheel dump cars were hauled by a Krauss steam locomotive. The tramway appears to have closed about 1902. In the early twentieth century the mine produced gold and copper. Mining activity ceased in 1920.

The impact on European markets due to World War II meant mining operations were subsidised by the government through power and freight concessions as the foreign revenue was seen as important to the Australian economy. In 1940, 550 people were employed and the local population was 1700. The mining company, Lake George Mines, built 152 fibro cottages for married miners, a hostel for single men and some of the population lived in tents. The company also built a theatre, hospital, tennis courts and a swimming pool, and paid for the medical staff, the provision of street lighting, electricity and water. 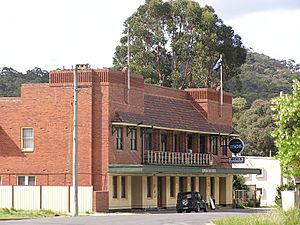 In the 1930s and 1940s many of the old buildings were replaced including the hotel. The new hotel built in 1938 was said to have the longest bar in Australia at the time; it was 32 metres long. 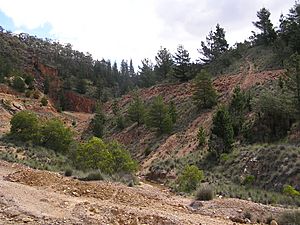 The Captains Flat railway line from Bungendore opened in 1940 with tri-weekly service. This was reduced to once a week following the closure of the mine. The railway was booked out of use on 31 August 1968 but reopened for a few weeks in 1969 for the filming of the movie "Ned Kelly".

The impact of sulphur and acid rain produced by the smelting has resulted in the area around the mines having a stark and somewhat alien landscape reminiscent of Queenstown in Tasmania.

In 1939 and 1942 mine tailings and slime dams collapsed into the Molonglo River. The resulting pollution severely damaged the ecological communities of the Molonglo River downstream from the mine site, and eradicated all native fish populations.

Prospecting has commenced in the area again, begun by Monaro Mining (later known as Australian-American Mining, then AusROC Metals Ltd) and taken over by Ironbark Gold.

All content from Kiddle encyclopedia articles (including the article images and facts) can be freely used under Attribution-ShareAlike license, unless stated otherwise. Cite this article:
Captains Flat Facts for Kids. Kiddle Encyclopedia.