Hoskinstown is a locality in Queanbeyan-Palerang Regional Council, New South Wales, Australia. The town is 38 km southeast of Canberra the Capital city of Australia, and 299 km southwest of Sydney. At the 2016 census, it had a population of 189.

The town is known for the Molonglo Observatory Synthesis Telescope operated by the University of Sydney. 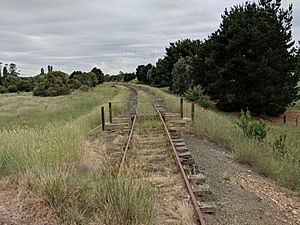 It had a public school from 1869 to 1967. Hoskinstown station was opened along with the Captains Flat railway line in 1940 and it closed in August 1968, a year before the line. The Catholic Church is dedicated to Saint Peter and Paul.

All content from Kiddle encyclopedia articles (including the article images and facts) can be freely used under Attribution-ShareAlike license, unless stated otherwise. Cite this article:
Hoskinstown, New South Wales Facts for Kids. Kiddle Encyclopedia.