Bungendore is a town in the Queanbeyan Region of New South Wales, Australia, in Queanbeyan-Palerang Regional Council. It is on the Kings Highway near Lake George, the Molonglo River Valley and the Australian Capital Territory border. It has become a major tourist centre in recent years, popular with visitors from Canberra and some of it has heritage protection. It has expanded rapidly in recent years as a dormitory suburb of Canberra. 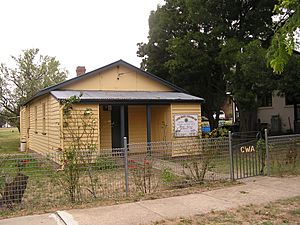 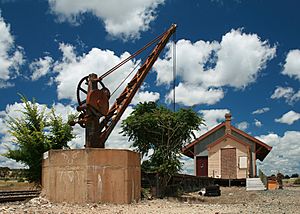 A disused rail loading platform and crane in Bungendore

Prior to European settlement, the area was occupied by the Ngarigo people. The first Europeans in the vicinity were members of the exploratory party of Dr Charles Throsby in 1820, who, along with Hamilton Hume, also originally explored the Braidwood area. In 1824, explorer Allan Cunningham passed through Bungendore. A year later, the first European settlers arrived. The mail service to Bungendore was introduced in 1837, enhancing the importance of the village and contributing to the proclamation of Bungendore as a "town" in the same year.

By 1848, 30 people populated the seven buildings in the town of Bungendore. When the railway arrived on 4 March 1885, the town began to grow more quickly. New buildings appeared rapidly, such as churches, the courthouse/police station, two schools and the post office.

The first post office was built in Bungendore in 1840, an Anglican church c 1843, and the Bungendore Inn in 1847. The latter became a Cobb and Co staging post. By 1851, the population was 63. The 1850s saw at least two other hotels established. A flour mill was built in 1861, St Mary's Roman Catholic Church and two denominational schools in 1862, the courthouse in 1864 and a public school in 1868. In 1866, local crops grown were recorded as being wheat, oats, barley and potatoes. Tourism is now a major contributor to the economy.

The town remained a railhead from 1885 until the line reached Queanbeyan in 1887. Partly because of the coming railway, the 1880s proved a boom period for the town and the population increased from 270 in 1881, to 700 by 1885. By then, Queanbeyan was emerging as the major town in the area.

In 1894, gold was discovered at Bywong. In 1901, Lake George and Bungendore were proposed as sites for the nation's capital city. This did not eventuate, as the drawcard of Lake George failed to impress the visiting Commissioners of the time.

By 1909 rabbit trapping had become an extremely valuable industry in the area around Bungendore. The town itself had a rabbit-freezing plant that employed 14 workers and over 250 trappers. In the year ending 31 July 1909, over 1.5 million rabbits were frozen at Bungendore.

In 1992 journalist Ian McPhedran wrote that Bungendore's locals and business sector had developed a method of community cooperation superior to most other Australian small towns.

On 29 January 2017 at the Werriwa Wiener Dash, an event held as part of the annual Bungendore Show, Bungendore set the record for the most number of Dachshunds in one place outside of a Dog Show with 154 dachshunds in attendance.

Bungendore is quite near a hill known as Gibraltar Hill. and is located close to the Great Dividing Range where it traverses the Butmaroo Range, some 10 km to the East, not far from the Butmaroo Homestead.

In 2008, following some community concerns the Capital Wind Farm was established north of Bungendore along Lake George.

All content from Kiddle encyclopedia articles (including the article images and facts) can be freely used under Attribution-ShareAlike license, unless stated otherwise. Cite this article:
Bungendore, New South Wales Facts for Kids. Kiddle Encyclopedia.