Eucalyptus gillenii, commonly known as the mallee red gum, Mt Gillen mallee or Mt Lindsay mallee, is a species of mallee that is endemic to inland Australia. It has smooth, mottled bark, linear to narrow lance-shaped adult leaves, flower buds in groups of seven or nine, white flowers and hemispherical or cup-shaped fruit. 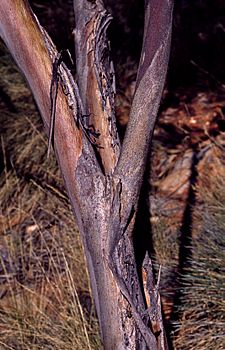 Eucalyptus gillenii was first formally described in 1926 by Alfred Ewart and Lesley Kerr in the Proceedings of the Royal Society of Victoria from samples collected near Mount Gillen by Ewatt in 1924. It is named for Francis James Gillen who was an anthropologist, ethnologist and the first postmaster at Alice Springs. Mount Gillen in the MacDonnell Ranges, where the type specimen was collected from, was also named for the same man.

This mallee is common on rocky hills in the central and south-western areas of Central Australia, especially in the MacDonnell Ranges and Petermann Ranges of the Northern Territory and Western Australia. It is less common on Mount Wooltarlinna and Mount Lindsay in the Birksgate Range of far north-western South Australia and there is an outlying population at Skirmish Hill in the Dean Range in Western Australia. It grows in crevices on and at the base of rock domes in water run-off areas. In South Australia it often occurs with Corymbia eremaea and Eucalyptus intertexta.

Mallee red gum is a hardy grower and is both frost and drought tolerant.

All content from Kiddle encyclopedia articles (including the article images and facts) can be freely used under Attribution-ShareAlike license, unless stated otherwise. Cite this article:
Eucalyptus gillenii Facts for Kids. Kiddle Encyclopedia.