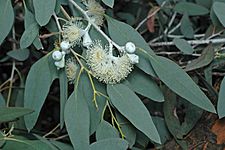 Eucalyptus morrisbyi, commonly known as Morrisby's gum, is a species of small to medium-sized tree that is endemic to a restricted area of Tasmania. It has loose slabs of rough bark near the base of its trunk, smooth pale grey bark above, lance-shaped to egg-shaped adult leaves, flower buds in groups of three, white flowers and barrel-shaped or cylindrical fruit. It is only known in the wild from a few small populations but has been widely planted as an ornamental.

Eucalyptus morrisbyi was first formally described in 1939 by Robert Brett in Papers and Proceedings of the Royal Society of Tasmania. Brett did not give a reason for the specific epithet (morrisbyi) but noted that "J. R. Morrisby" had planted an avenue of this species. John Robert Morrisby (1832–1923) gathered seed of the species and planted the species on a farm near Sandford that was still the home of a Morrisby family in 1978.

Morrisby's gum grows in dry woodland, mostly in gullies between hilly slopes, and mostly in relatively pure stands. It is only known from the wild in the Cremorne area, in two populations on the eastern shore of the River Derwent.

This eucalypt is unlikely to go extinct because of ornamental plantings, but there is a continuing decline in wild populations. The species is listed as "endangered" under the Australian Federal Government Environment Protection and Biodiversity Conservation Act 1999 and the Tasmanian Government Threatened Species Protection Act 1995. The total population is estimated to number fewer than 2,500 mature plants in no more than five locations. The main threats to the species in the wild include land clearing, climate change, browsing by mammals such as possums, insect browsing, especially by the autumn gum moth (Mnesampela privata), competition, including by the native vine, Cassytha pubescens and introduced weeds including serrated tussock (Nassella trichotoma) and inappropriate fire regimes.

All content from Kiddle encyclopedia articles (including the article images and facts) can be freely used under Attribution-ShareAlike license, unless stated otherwise. Cite this article:
Eucalyptus morrisbyi Facts for Kids. Kiddle Encyclopedia.