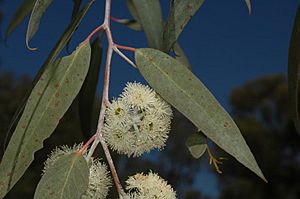 Eucalyptus risdonii, commonly known as the Risdon peppermint, is a species of small tree that is endemic to a small area in southern Tasmania. It has smooth bark, a crown composed mostly of sessile, glaucous, egg-shaped juvenile leaves arranged in opposite pairs. The flower buds are arranged in groups of between nine and fifteen and the fruit are cup-shaped, conical or hemispherical.

Eucalyptus risdonii was first formally described in 1847 by Joseph Dalton Hooker in the London Journal of Botany. The specific epithet (risdonii) refers to the locality Risdon, where the type specimen was found.

The Risdon peppermint is only known from the dry slopes on the eastern side of the River Derwent near Risdon and Grass Tree Hill. It grows in low, open forest on sunny, north-west facing ridges.

This species is reported to be a juvenilised form of its sister species, E. tenuiramis.

This species is classed as "rare" under the Tasmanian Government Threatened Species Protection Act 1995.

All content from Kiddle encyclopedia articles (including the article images and facts) can be freely used under Attribution-ShareAlike license, unless stated otherwise. Cite this article:
Eucalyptus risdonii Facts for Kids. Kiddle Encyclopedia.