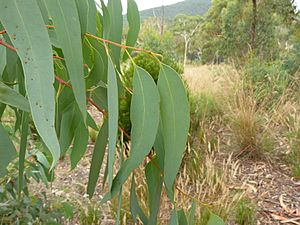 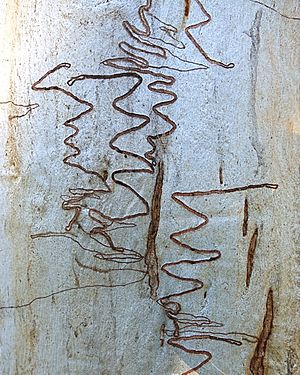 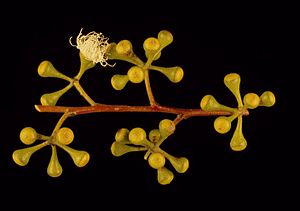 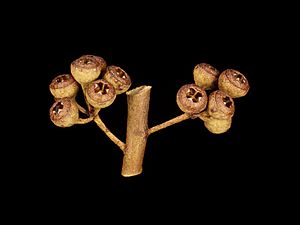 Eucalyptus rossii, commonly known as inland scribbly gum or white gum, is a species of small to medium-sized tree that is endemic to New South Wales and the Australian Capital Territory. It has smooth bark with insect scribbles, lance-shaped adult leaves, flower buds in groups of between nine and fifteen, white flowers and hemispherical or shortened spherical fruit.

Eucalyptus rossii was first formally described in 1902 by the botanist Richard Thomas Baker and chemist Henry George Smith in A Research on the Eucalypts especially in regard to their Essential Oils. The specific epithet (rossii) honours William John Clunies-Ross (1850-1914), for his attention to the flora of the Bathurst region.

Inland scribbly gum has a scattered distribution over the New South Wales tablelands, western slopes and the central coast, from Tenterfield in the north to Bombala in the south. The trees grow well in sandy and stony well-drained soils, usually on slopes. They are found in areas with moderate temperatures and rainfall of 600 to 1,000 mm (24 to 39 in) per annum. They are part of open dry sclerophyll woodland communities and associated species include E. haemastoma and E. racemosa.

These trees usually have scribble marks on the bark formed by the burrowing larvae of a small moth, Ogmograptis scribula. The insect lays eggs within layers of bark and when the larvae hatch they burrow into the bark.

E. rossii is available commercially in seed form or as seedlings. It is useful as a shade tree which grows well in full sun with well drained soils that can cope in poor shallow, stony soils. It is both drought and frost tolerant with a flower display through summer that will attract birds.

All content from Kiddle encyclopedia articles (including the article images and facts) can be freely used under Attribution-ShareAlike license, unless stated otherwise. Cite this article:
Eucalyptus rossii Facts for Kids. Kiddle Encyclopedia.