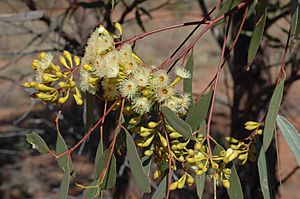 Eucalyptus thozetiana is a species of tree that is native to inland north-eastern Australia. It has smooth bark, or sometimes with rough bark near the base, linear to lance-shaped adult leaves, flower buds in groups of between seven and eleven, white flowers and urn-shaped, barrel-shaped or cylindrical fruit.

In his book Eucalyptographia of 1883, under the heading "Eucalyptus gracilis", Ferdinand von Mueller noted -

Either as a variety or perhaps even as a species can be distinguished from E. gracilis as Eucalyptus gathered by the lamented late Monsieur A. thozet in his last botanical journey to Expedition-Range, during which he became a victim of the paludal fever, to which this excellent man so sadly succumbed. This Eucalyptus, which should bear his name, can be distinguished by its longer leaves, narrow-ellipsoid flowerbuds, smaller, not or less conspicuously angular calyces and also smaller and narrower fruit, irrespective of the size of the tree, which rises to a height of 60 feet, according to Mr. E. Bowman and Mr. P. O'Shanesy, who noticed it near the Mackenzie- and Comet-River.

In 1903, Joseph Maiden based a description of Eucalyptus calycogona var. thozetiana on Mueller's excerpt in his book, A Critical Revision of the Genus Eucalyptus.

In 1906, Richard Thomas Baker raised the variety to species status as Eucalyptus thozetiana in Proceedings of the Linnean Society of New South Wales. The specific epithet honours Anthelme Thozet.

Eucalyptus thozetiana usually grows on sandy soils in woodland and open forest. It is widespread between Emerald, Junda and the Darling Downs in Queensland and near Arltunga in the south of the Northern Territory.

This eucalypt is classified as "least concern" under the Queensland Government Nature Conservation Act 1992, and as "near threatened" in the Northern Territory.

All content from Kiddle encyclopedia articles (including the article images and facts) can be freely used under Attribution-ShareAlike license, unless stated otherwise. Cite this article:
Eucalyptus thozetiana Facts for Kids. Kiddle Encyclopedia.