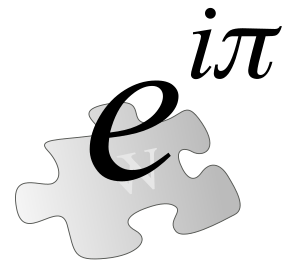 It features the following mathematical constants:

It also features three of the basic mathematical operations: addition, multiplication and exponentiation.

Euler's identity is named after the Swiss mathematician Leonard Euler. It is not clear that he invented it himself.

Respondents to a Physics World poll called the identity "the most profound mathematical statement ever written", "uncanny and sublime", "filled with cosmic beauty" and "mind-blowing".

Many equations can be written as a series of terms added together. This is called a Taylor series.

can be written as the Taylor series

As well, the sine function can be written as

seems to be a sum of sine and cosine's Taylor series, except with all of the signs changed to positive. The identity we are actually proving is

So, on the left side is

, whose Taylor series is

On the right side is

if we add these together, we have

Now, if we replace x with

Since we know that

which is the statement of Euler's identity.

All content from Kiddle encyclopedia articles (including the article images and facts) can be freely used under Attribution-ShareAlike license, unless stated otherwise. Cite this article:
Euler's identity Facts for Kids. Kiddle Encyclopedia.