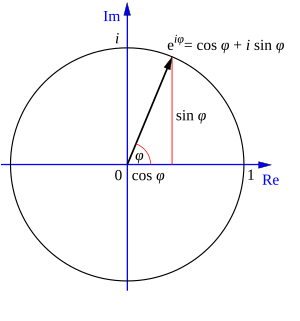 where x is a real number, e is Euler's number and i is the imaginary unit.

It makes a relation between trigonometric functions and exponential functions of complex numbers. It is named after Leonhard Euler, who published it in 1748. When he published it, Euler said that the angle must be a real number. Later, it turned out that the formula also works if the angle is not a real number, but a complex one.

When the angle is

All content from Kiddle encyclopedia articles (including the article images and facts) can be freely used under Attribution-ShareAlike license, unless stated otherwise. Cite this article:
Euler's formula Facts for Kids. Kiddle Encyclopedia.