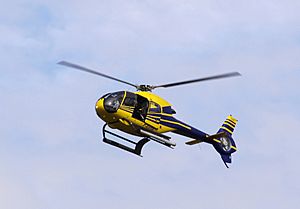 The Eurocopter EC120 Colibri is a light helicopter designed and built in France and Germany, with help of China and Singapore. The name of Colibri is the french translation for hummingbird. It is built by Eurocopter in Marignane. Its first flight was in 1995. Some are used by the Chinese, French and Spanish air forces mainly for training.

All content from Kiddle encyclopedia articles (including the article images and facts) can be freely used under Attribution-ShareAlike license, unless stated otherwise. Cite this article:
Eurocopter EC120 Colibri Facts for Kids. Kiddle Encyclopedia.