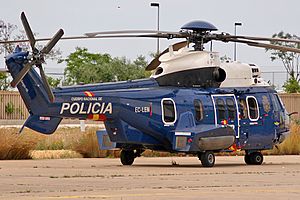 The Eurocopter EC225 Super Puma Mk-2 is a medium helicopter designed and built in France by Eurocopter. It's a modernized variant of the Eurocopter AS-332 Super Puma. Originally civilian, it's also a military helicopter, used for transport, search and rescue, and support. Maiden flight in 2000, it's in production in 2013. Some are used by French Navy as replacement of formers Super Frelon.

All content from Kiddle encyclopedia articles (including the article images and facts) can be freely used under Attribution-ShareAlike license, unless stated otherwise. Cite this article:
Eurocopter EC225 Super Puma Mk-2 Facts for Kids. Kiddle Encyclopedia.